There are quotes that summarize a lot of organizational design wisdom in a single sentence. In the document posted below, I include six quotes that I particularly like and briefly explain how I interpret each of them. Let me know what you think.

P.S. If you haven’t seen it yet you may also take a look at my earlier post about metaphors. 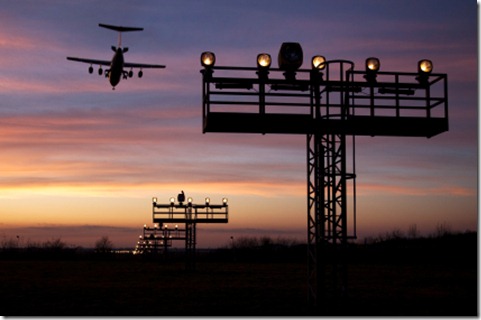 Most of the clients I work with are concerned about finding the best possible organizational model, given the particular strategic goals they pursue and the constraints they face.

Yet some also mention to me that they believe reorganizing the firm will be beneficial in itself.

There’s actual some support for this view in the academic literature (although I have not come across any empirical research).

The key idea is that complexity gradually increases in most organizations (see my earlier blog post about this topic). Over time, organizations tend to add units, layers, processes, and systems. Increasing bureaucracy means that things move slower. More complexity may also lead to more stress and conflict within and between sub-units of the organization.

In his books about complexity and design, MIT professor Nam Suh has explained that we can observe periodic behavior and reinitialization in many technical, biological, and human systems.

He uses airline scheduling as a case. Airlines can reinitialize the system by moving planes down during the night. All of the uncertainties that accrue during a day (delays, maintenance issues etc.) can then be terminated to ensure that they do not extend into the following day. Professor Suh claims that such periodic behavior is critical in order to avoid the build-up of unnecessary complexity.

Maybe a reorganization is a bit like this. I am not saying that the particular organizational model that one selects is irrelevant – in fact, I think it is critically important – but the mere act of reorganizing may have some positive benefits, too.

When we reorganize we break up established patterns. We regroup units. We place people into new roles – sometimes people whose skills and competence were neglected in the old structure.

Although any reorganization certainly has a cost, it may also help ensure that the complexity of the past is not carried forward into the future.

Image used with permission courtesy of Many Cornet, www.bonkersworld.net

At a conference last week in Oslo, I attended a session where we discussed the state of academic research on organization design. An interesting talk was delivered by Professor Lars Groth of the University of Oslo (pictured below).

Prof. Groth dissected these organizational forms and argued that they could all be explained by using the terminology and concepts in Mintzberg’s book on organization design from 1979. As an example, he claimed that the so-called C-form is basically another term for Mintzberg’s concept of the Adhocracy.

He argued that this belief was like thinking that the introduction of the telephone would remove the need for bosses in an organization. It didn’t; and organizations with computer networks are perhaps somewhat flatter than before but still hierarchical.

I agree with Prof Groth that there is a tendency to exaggerate “newness” and create buzzwords, rather than building on earlier established concepts. The effect is that we become unable to build cumulative knowledge about organization design as we keep on reinventing the same concepts.

I would like to take issue with him on a couple of points, though. First, I do think there are some organizational forms today that were not described in the older literature. As an example, Mintzberg’s description of the matrix form is not identical to the current concept of the multidimensional organization (something I discuss in some detail in my upcoming book).

More importantly, though, I think it is somewhat futile to look at “new organizational forms” separately from the purposes and functions that they serve. It’s a bit like an engineer taking apart an iPad and concluding – “Well, there’s nothing really new here, only a screen, chassis, microprocessor, and battery – we have seen all that before!”. Yes, we have, but innovation is not only about new forms, but about how you re-combine existing things to meet functional requirements that were previously seen as incompatible (in the case of the iPad, these functions could be excellent usability, affordable price, great visual design and connectivity, etc.).

So rather than looking at organizational forms in isolation, we should ask about functions: Are there organizations today that are able to create organizations that meet different functional demands that we have thought were difficult or impossible to achieve (in combination)?

As an example, Mintzberg (1979) was very critical of the prospect of democratic organizations where workers elect supervisors and/or participate in decision making. He pointed out that the available studies show that democratic governance in organizations lead to less efficiency and more rather than less centralization. The question we should ask today is whether there are organizations that are able to introduce democratic governance, while at the same time maintaining speed and efficiency. If so, that would be something new.

Creative organization designers are not the ones who invent new words for organizational forms but those that use already familiar building blocks  (roles, processes, structures) in new combinations to achieve results that others thought were impossible.

Purely top-down decision processes are becoming less common. The leader is still responsible for making the final decision (as he/she should be) when it comes to organizational re-designs. But most leaders realize that organization design decisions are complex, that there may be multiple alternatives, and that people at lower levels of the organization may have access to information that should inform the decision. For this reason, some degree of participation and involvement is nearly always sought, by means of interviews, workshops, distribution and analysis of surveys, or circulation and discussion of proposed models among key managers.

Yet more participation does not automatically lead to a better process. One key challenge that I have noted is to strike a balance between divergence (creating alternatives/ideas) and convergence (getting closure and reaching consensus on a given solution). It’s relatively easy to ask 100 managers for their feedback regarding a proposed new organizational model. It is far more difficult to actually process the information that you then receive – each manager may have 5 or more concerns, and their concerns or ideas may (if you are unlucky!) be both sensible and thoughtful. So then you have 500 things that may need to be considered. Do you have the capacity for that? Do you have the time?

The key is to carefully structure the organization re-design process in manner so you get divergence and convergence at the right points in time. You want as many as ideas regarding possible problems and solutions at the early stage. Later, you want a finite set of decision alternatives that can be evaluated against each other.

It is also important to consider how to ask questions during the process. If a large number of people are involved, it may not be feasible to ask open-ended questions, particularly not at the later stages. Then the alternatives and decision criteria should already be established and accepted, so people should not be asked to offer their general opinion about what to do, but be invited to evaluate specific alternatives against the defined criteria.

A project team may also create various types of tools for handling the information that is collected. I sometimes use an “issue log” – a simple list in an Excel file – where I write down observations and ideas that I have myself as well as ideas and comments from those that I interview or work with in workshops. I try to categorize the issues so that I can quickly group and search through the items when the need arises.

Far too often, project teams ask for input from the organization, but have insufficient capacity for processing the information that they receive. The result is often the opposite of what is intended: Rather than increased engagement and ownership, people become frustrated and even cynical if they perceive the participatory process as less than genuine.  If we want real participation in a re-design process, we need to plan how to collect, analyze, and act on ideas and suggestions from people that get involved.

I just returned from Frankfurt where I participated in the first meeting of EODF – a European community of people interested in organisation design. We were a small group of participants from Britain, Germany, Austria, the US, the Netherlands, and Norway (myself). We hope to attract a lot more people – from many more countries – at the next meeting.

We were pleased to be joined by two leading academics, namely Andrew Campbell (pictured below) from the Ashridge Strategic Management Centre and Georges Romme from the Eindhoven University of Technology. 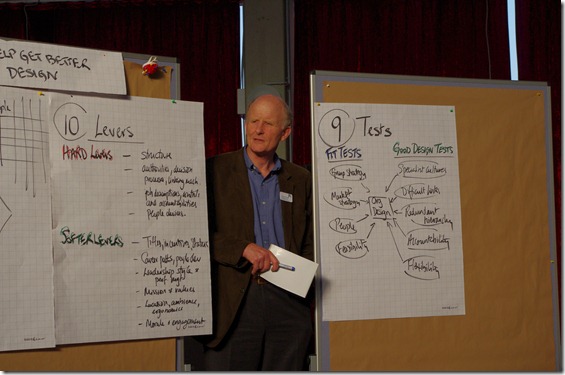 I gave a talk based on a project I did this Summer together with an internal consultant in a financial services group, providing a brief introduction to functionally based analysis of organizational structures. You can view the slide sets I used below.

A particularly interesting discussion, I found, dealt with the future of organization design. This discussion was initiated by Tim Pidsley of the consulting firm Tricordant, who captured our ideas about how organization will be done in 2021 on the flip chart shown below. 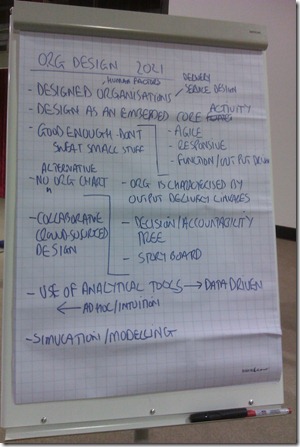 The key items listed here were about:

I touch on some of these future developments in the textbook I have written, and was glad to see that others seem to agree where the field might be heading and what potential there is to raise the discipline to a new level. At the same time, naming the trends is one thing, a lot of conceptual and practical work will be required to introduce and facilitate the adoption of new organization design methods. Hopefully, the EODF and similar communities in the US and in Africa may play a positive role in this.