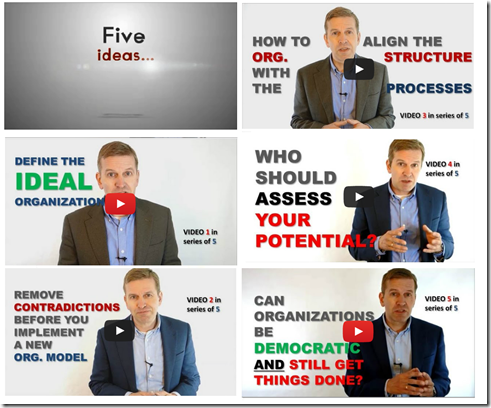 In the videos posted in the last five blog posts, I have described five important ideas in the field.

What I tried to do was to select innovative ideas (or concepts/tools) that I thought relatively few people were aware of, and that few organizations have implemented so far.

At the same time – ideas that I believed would have a big positive impact, if adopted and implemented more widely.

Here, let me briefly summarize what each idea is about and why I think it is needed.

1. In the first video I spoke about idealized design. Unlike the typical visioning process, it does not require you to predict what the future will be like. Rather, it asks you to assume that the environment will be exactly the same as today, and to image what would be the ideal organization given the current challenges facing the organization.

The purpose is to raise the aspiration level and spur creativity, while at the same time developing realistic solutions that one can start implementing today.

2. In the second video I described some key features of the axiomatic design approach, which was the main inspiration for my book (particular chapters 2, 4, and 8). The key observation is that new organizational designs often contain contradictions which prevents them from being fully effective.

At times, these contradictions are only discovered after a new organizational model is implemented. For example, one discovers that although a new model enables the organization to reach one goal, such as cost effectiveness, it compromises the ability to reach another goal, such as improving the customer experience.

The key idea is that we need to be more precise in defining requirements and to test how different requirements relate to each other, before implementing a new design (In the coming months I intend to develop this idea further and develop tools that I will test on my client projects.)

3. In the third video, I discussed the classic issue of how to align the formal organization with the work processes. I presented the FRAPS diagram, drawn from my book. The diagram is intended to summarize a key insight in the academic research on organization design: To maximize effectiveness and minimize coordination cost, you need to integrate (between roles/units/processes) when there’s a high level of interdependency, and separate when there is a low level of interdependency. It’s a simple principle, but frequently overlooked.

4. In the fourth video, I turned to vertical structure and talked about how to define managerial accountability. In particular, I discussed Elliott Jaques’ concept of three tier management, which distinguishes between the responsibilities of the direct line manager and the manager’s manager. This is not a new idea, but few companies have implemented it consistently. Every large organization that intends to get better at developing talent and facilitating internal mobility should consider it.

5. Finally, in the fifth video I discussed a somewhat controversial issue, namely, why we need hierarchy and whether democratic governance is a viable alternative. There have been many idealistic attempts at removing management hierarchies, but as I explained in the video, few have been successful.

I argued that the basic challenge isn’t to create more participation or engagement per se, but to recognize the basic design contradiction: To be successful, a democratic organization would also need to be effective. That’s why we have organizations – to get things done. I describe the best option I have encountered so far – the circular organization.

This video marathon has come to an end, but I consider these five ideas to be foundational, so I am going to return to these topics frequently on this blog, but maybe discuss them from different angles. One thing I want to do is to show in a bit more detail how to apply these ideas in an actual redesign process.

By the way, I received several comments about the videos (some posted on the blog, some via email) – I appreciate that, I learn a lot from your feedback and try to respond to every message I receive, so keep’em coming.